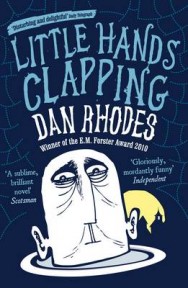 Once upon a time, in a room above a German museum, there lived an old man …A caretaker by day, by night he enjoys the sound of silence, broken only by the occasional crunch of a spider between his teeth. However, the old man’s solitude is disturbed as unusual activities at the museum start to attract attention. A pair of young and outrageously beautiful lovers, a baker’s son with a passion for the euphonium, and a dog called Hans are just some of the innocents pulled into Rhodes’s mesmerising world.

'Totally sick and brilliant in all the right ways. He sucks you into his world and before you know it, you're willingly trapped. So very smart. I loved it' DOUGLAS COUPLAND

Dan Rhodes was born in 1972. He is the author of five other books: Anthropology, Don’t Tell Me the Truth About Love, Timoleon Vieta Come Home, Gold and, writing as Danuta de Rhodes, The Little White Car. In 2003 he was named by Granta magazine as one of their Twenty Best of Young British Novelists and in 2010 by the Daily Telegraph as one of their Best British Novelists Under Forty. He is the winner of many awards including the Author’s Club First Novel Award and the E.M. Forster Award. He lives in Derbyshire.