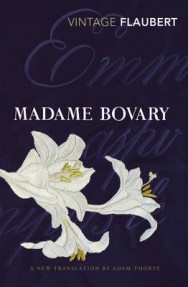 A NEW TRANSLATION BY ADAM THORPE ‘A great novel that is also an inexhaustible pleasure to read’ Guardian Emma Bovary is an avid reader of sentimental novels; brought up on a Normandy farm and convent-educated, she longs for romance. At first, Emma pins her hopes on marriage, but life with her well-meaning husband in the provinces leaves her bored and dissatisfied. She seeks escape through extravagant spending sprees and, eventually, adultery. As Emma pursues her impossible reverie she seals her own ruin. Madame Bovary is one of the greatest, most beguiling novels ever written. ‘Thorpe’s new translation is stunning and heartily recommended Scotsman ‘Thorpe’s new translation is to die for’ Independent ‘[Thorpe’s] hard work has yielded beauty. The rhythms are perfectly judged, unexpected enough to make the reader attend to every word’ Robert Chandler, TLS

"Magnificent. I insist everyone reads Adam Thorpe's new translation." Vogue "A handsomely bound hardback edition that perfectly befits the beautiful new translation therein… we are pretty confident that Thorpe's bash at Bovary is a contender for the new best English version out there. Sensitive and musical, and simply and wittily annotated, it's got "new classic" written all over it. Plus it's dressed in this really elegant embroidered design by Karen Nichols, so everything gangs up and makes it basically a must-buy." — Stuart Hammond Dazed and Confused "Flaubert's 1856 novel begins with marriage and what follows is the archetypal tale of a desperate housewife" Daily Telegraph "Mesmerising" Independent "The most scandalous novel of all time" Playboy

Gustave Flaubert was born in Rouen in 1821, the son of a distinguished surgeon and a doctor’s daughter. After three unhappy years of studying law in Paris, an epileptic attack ushered him into a life of writing. Madame Bovary won instant acclaim upon book publication in 1857, but Flaubert’s frank display of adultery in bourgeois France saw him go on trial for immorality, only narrowly escaping conviction. Both Salammbo (1862) and The Sentimental Education (1869) were poorly received, and Flaubert’s genius was not publicly recognized until Three Tales (1877). His reputation among his fellow writers, however, was more constant and those who admired him included Turgenev, George Sand, Victor Hugo and Zola. Flaubert’s obsession with his art is legendary: he would work for days on a single page, obsessively attuning sentences, seeking always le mot juste in a quest for both beauty and precise observation. His style moved Edmund Wilson to say,’Flaubert, by a single phrase – a notation of some commonplace object – can convey all the poignance of human desire, the pathos of human defeat; his description of some homely scene will close with a dying fall that reminds one of great verse or music.’ Flaubert died suddenly in May 1880, leaving his last work, Bouvard and Pecuchet, unfinished. Adam Thorpe was born in Paris in 1956. His first novel, Ulverton, was published in 1992, and he has written nine others – most recently Hodd – two collections of stories and five books of poetry. He lives in France with his wife and family.