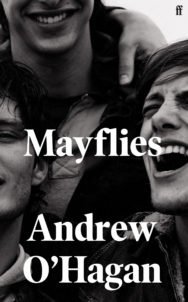 A heartbreaking novel of an extraordinary lifelong friendship.

Everyone has a Tully Dawson: the friend who defines your life.

In the summer of 1986, in a small Scottish town, James and Tully ignite a brilliant friendship based on music, films and the rebel spirit. With school over and the locked world of their fathers before them, they rush towards the climax of their youth: a magical weekend in Manchester, the epicentre of everything that inspires them in working-class Britain. There, against the greatest soundtrack ever recorded, a vow is made: to go at life differently. Thirty years on, half a life away, the phone rings. Tully has news.

Mayflies is a memorial to youth’s euphorias and to everyday tragedy. A tender goodbye to an old union, it discovers the joy and the costs of love.

Andrew O’Hagan is one of his generation’s most exciting and most serious chroniclers of contemporary Britain. Following two previous nominations, his latest novel, The Illuminations, has been longlisted for the 2015 Man Booker Prize. He was voted one of Granta‘s Best of Young British Novelists in 2003. He has won the Los Angeles Times Book Award and the E. M. Forster Award from the American Academy of Arts & Letters. He lives in London.