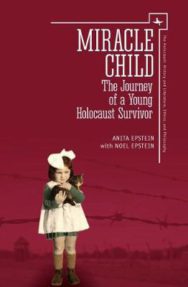 Miracle Child: The Journey of a Young Holocaust Survivor

This memoir is about a Jewish baby born in the Krakow ghetto in November 1942, three years after Hitler conquered Poland, and, remarkably, escaping death-one of a mere one half of one percent of Jewish children in Poland who survived during the Nazi era. Her life was saved because her parents hid her with a Catholic family. Just as remarkably, her mother, still alive after suffering terribly through four of Hitler’s camps, traveled for weeks back to Poland and found her again. The book also depicts the author’s postwar challenges in Germany and America.

Anita Epstein, among the world’s younger Holocaust survivors, came to America at seven years old and, in her teens, auditioned twice for the film role of Anne Frank. She later became a lobbyist for education and trade issues. She worries a great deal about what will happen when the last Holocaust survivors, like her, are gone.Noel Epstein, former Education Editor of The Washington Post, spent more than forty years as a journalist with the Post, the Wall Street Journal and as an independent consultant. He is the editor of Who’s In Charge Here? The Tangled Web of School Governance and Policy (Brookings Institution Press, 2004) and author of Language, Ethnicity, and the Schools (Institute for Educational Leadership, George Washington University, 1977), which helped shape U.S. bilingual education policy.