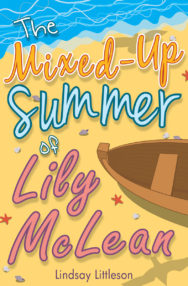 The Mixed-Up Summer of Lily McLean

Lily’s already got plenty going on living with a moody teenage sister, two feral brothers and a messy baby sister. Mum and Gran are stressed to the max, both dads are out of the picture and the cats aren’t exactly pulling their weight. But when she starts getting mixed-up warnings not to go on holiday to the tiny, safe Scottish island of Cumbrae, her summer just gets weirder and weirder.

The thing is, whoever’s talking to Lily doesn’t even seem to know she’s doing it. If she’s a ghost, she’s not a very good one. And there’s something about her that Lily finds awfully, spine-tinglingly familiar. . .

Lindsay Littleson is a primary school teacher in Renfrewshire, Scotland. Since taking up writing for children in early 2014 she has published a short story with Walker Books, in addition to winning the Kelpies Prize with her first children’s novel, The Mixed-Up Summer of Lily McLean.