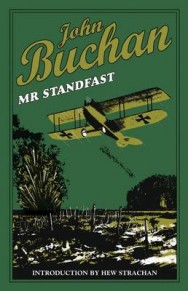 ‘A writer touched by genius’ – “The New Criterion”. ‘Between Kipling and Fleming stands John Buchan …the father of the modern spy thriller’ – Christopher Hitchens. ‘Eat your heart out, Jason Bourne’ – “Evening Standard”. Recalled from active service on the Western Front, Richard Hannay is sent undercover on a crucial secret mission to find a dangerous German agent at large in Britain. Disguised as a pacifist, Hannay travels from London to Glasgow to the Scottish Highlands and Islands in his search, which eventually ends in a spectacular climax above the battlefields of Europe. John Buchan’s inside knowledge of trench warfare and government intelligence lend a formidable realism to this superlative spy story. This is a nail-biting classic from a master storyteller.

John Buchan was a Scottish diplomat, barrister, journalist, historian, poet and novelist. He published nearly 30 novels and seven collections of short stories. He was born in Perth, an eldest son, and studied at Glasgow and Oxford. In 1901 he became a barrister of the Middle Temple and a private secretary to the High Commissioner for South Africa. In 1907 he married Susan Charlotte Grosvenor and they subsequently had four children. After spells as a war correspondent, Lloyd George’s Director of Information and Conservative MP, Buchan moved to Canada in 1935. He served as Governor General there until his death in 1940. Hew Strachan is Chichele Professor of the History of War at the University of Oxford; his research interests include military history from the 18th century to date, including contemporary strategic studies, but with particular interest in the First World War and in the history of the British Army.