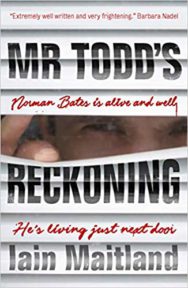 Norman Bates is alive and well. And he’s living just next door.

Behind the normal door of a normal house, in a normal street, two men are slowly driving each other insane. One of them is a psychopath.

The father: Mr Todd is at his wits’ end. He’s been robbed of his job as a tax inspector and is now stuck at home… with him. Frustrated. Lonely. Angry. Really angry.

The son: Adrian has no job, no friends. He is at home all day, obsessively chopping vegetables and tap-tap-tapping on his computer. And he’s getting worse, disappearing for hours at a time, sneaking o to who-knows-where?

The unholy spirit: In the safety of suburbia, one man has developed a taste for killing. And he’ll kill again.