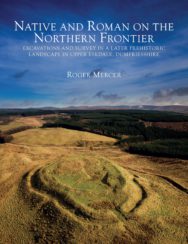 Home > Academic > Native and Roman on the Northern Frontier

Native and Roman on the Northern Frontier

Excavations and Survey in a Later Prehistoric Landscape in Upper Eskdale, Dumfriesshire

Native and Roman on the Northern Frontier presents the definitive report of a programme of excavation and survey at two sites south of Eskdalemuir, in the valley of the River White Esk, Dumfriesshire, which have wide-ranging implications for the study of the Iron Age and Roman frontiers. Over two years a small-scale intervention at the Castle O’er hillfort and the total excavation of a unique enclosure at Over Rig were carried out, the results of which are brought together and documented in detail for the first time in this volume.

The book opens with a comprehensive introduction to the geology of the area and the background to the project. It then charts the project from the initial archaeological field survey of a substantial bloc of the Upper Esk Valley around Castle O’er to detailed accounts of the excavations at the Castle O’er hillfort and the enclosure at Over Rig. Specialist contributions on evidence including glass, and wood artefacts and faunal and floral assemblages, provide in-depth analysis of particularly significant finds. An extensive discussion follows which explores the evidence uncovered from work in Eskdale and the possible implications it has for the current understanding of the Roman occupation of northern Britain. Throughout the volume the landscape and structures are reviewed in the wider context of comparable sites and evidence across Scotland and Northern England to place these sites firmly in the narrative of life in Iron Age and Roman Britain.

Meticulously researched and with an abundance of colour photographs, plans and diagrams to bring the excavation to life, this book makes a vital and thought-provoking contribution to scholarship of the Iron Age in Scotland and life on the Roman frontier in south-west Scotland and beyond.

Roger Mercer is an Honorary Professorial Fellow in European Prehistory at the University of Edinburgh, and former Chief Executive of the Royal Commission on the Ancient and Historical Monuments of Scotland. His previous publications include Farming Practice in British Prehistory and (with F M Healy) Hambledon Hill, Dorset, England: Excavation and Survey of a Neolithic monument complex and its surrounding landscape.