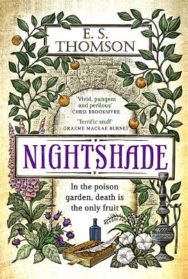 London, 1851. Restless and bored after a long hot summer, apothecary and poison expert Jem Flockhart decides to redesign her physic garden. But plans are thrown into confusion when a man’s skeleton is unearthed from beneath the deadly nightshade, a smaller, child-like skeleton curled at its feet. The body bears evidence of knife wounds to its ribs and arms, and is accompanied by a collection of macabre objects: a brass bowl, a curious coin-like token, a set of tiny ivory sculls.The police claim the victim is too long-buried for answers to be found, but for Jem, a corpse in her own garden is something that cannot be ignored. The plans to the garden, laid out some forty years earlier, reveal a list of five names.When Jem and Will start asking questions, the murders begin. Each victim has a past connection with the physic garden; each corpse is found with its jaw broken wide and its mouth stuffed with deadly nightshade. As they move closer to uncovering the truth Jem Flockhart and Will Quartermain encounter a dark world of addiction, madness, power and death that strikes at the very heart of Jem’s own history. This time, the poison is personal.

E. S. Thomson’s work has been longlisted for the CWA Endeavour Historical Dagger, and shortlisted for the Saltire Prize, the Scottish Arts Council First Book Award and the William McIlvanney Crime Book of the Year Award. She has a PhD in the social history of medicine, and tries to fit as much medical history into her books as possible. She works as a university lecturer by day, and writes by night. Elaine lives in Edinburgh with her two sons.