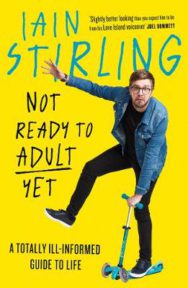 Home > Biography and Autobiography > Not Ready to Adult Yet: A Totally Ill-informed Guide to Life

Not Ready to Adult Yet: A Totally Ill-informed Guide to Life

Hilarious life lessons from the voice of a generation.So, what do you write about when you do a book? Yourself? Nah, I’ve not done enough stuff yet (you’ve got to think word count; I’d really have to drag out that time I went caravanning with Aunty Pam and Uncle Bill in order to achieve anything other than `pamphlet’ status). So, what about my generation? Millennials. We’ve got loads of stories. We’ve been celebrated and scorned; it seems we’re the envy, fascination and disgrace of the world.Throughout life, millennials have been taught we’re perfect and should live a perfect life – from being mollycoddled by our parents to receiving awards for taking part at school, and the beautiful, filtered lives we all see and share on social media. We’ve been told, whatever happens, life should be flawless; whatever you do, don’t fuck up. And then we enter the real world and start work, and start having relationships, and failure starts to rear its ugly head. A head none of us were warned about or indeed are ready for.We were told failure was never an option. And I believed them. But, truth be known, I’ve fucked up at every point. As have you. And honestly, it’s fine.In his brilliant first book, Iain explores why millennials are the way they are – and whether that makes us self-obsessed, work-shy, mollycoddled, egomaniacs; or just a misunderstood generation with a fear of failure.Funny, provocative and packed-full of entertaining stories, is what my publishers have told me to say about this book. But actually this is my ill-informed guide to what life is really like for millennials and how we can navigate it better.

Reviews of Not Ready to Adult Yet: A Totally Ill-informed Guide to Life

Things the press have said about Iain on Love Island:`Love Island is really funny, thanks in no small part to Scottish comedian Iain Stirling's voiceover.' The Guardian`Voiceover king Iain Stirling has become a cult star for his tongue-in-cheek quips and commentary' Daily Mail`People went wild for his hilarious one-liners and witty observations' The Sun`There's only one true winner of Love Island: and that's Iain Stirling… He's enchanting the show's millions of viewers' NME`His commentary is one of the best in the biz… From pithy one-liners to hilarious observations on the day's goings on, the 29-year-old is quickly emerging as our favourite star' Mirror`What's the best thing about Love Island? The drama? The bed-hopping? Actually, many viewers maintain it's the witty voiceovers' Metro`By far one of the best components of the show is the voiceover guy, Iain Stirling' Heatworld`Iain Stirling has won us all over with his dry-witted narration' BBC Newsbeat`The man who always drops the truth bombs and a sassy remark… that person is voiceover genius Iain Stirling' Cosmopolitan`His Love Island commentary is the stuff of legend.' OK!Reviews of Iain's current tour U OK HUN?:`At best the Edinburgh native is an unhinged free-form anecdotist – his closing tale of a disastrous CBBC gig is a belter' Mail on Sunday`A show with a dark edge but delivered with the utmost skill and affability… Expect this performer to be playing to huge arenas long after Love Island star Marcel Somerville's book has begun gathering dust.' Metro`An extremely funny hour of observational and surreal comedy' Telegraph

Iain Stirling is a stand-up comedian and BAFTA winning presenter. He is best known as the highly memorable voice of the hit reality show Love Island (ITV2) as well as being the driving force behind the concept of comedy panel show The Dog Ate My Homework (CBBC).