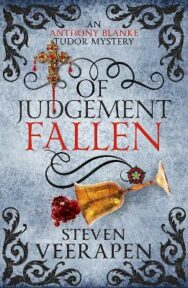 Spring, 1523. Henry VIII readies England for war with France. The King’s chief minister, Cardinal Wolsey, prepares to open Parliament at Blackfriars. The eyes of the country turn towards London. But all is not well in Wolsey’s household. A visiting critic of the Cardinal is found brutally slain whilst awaiting an audience at Richmond Palace. He will not be the last to die.Anthony Blanke, trumpeter and groom, is once again called upon to unmask a murderer. Joining forces with Sir Thomas More, he is forced to confront the unpopularity of his master’s rule. As the bodies of the Cardinal’s enemies mount up around him, Anthony finds himself under suspicion. Journeying through the opulence of More’s home, the magnificence of Wolsey’s York Place, and the dank dungeons of London’s gaols, he must discover whether the murderer of the Cardinal’s critics is friend or foe.With time running out before Parliament sits, Anthony must clear his name and catch the killer before the King’s justice falls blindly upon him.

Steven Veerapen was born in Glasgow to a Scottish mother and a Mauritian father and raised in Paisley. Pursuing an interest in the sixteenth century, he was awarded a first-class Honours degree in English, focussing his dissertation on representations of Henry VIII’s six wives.