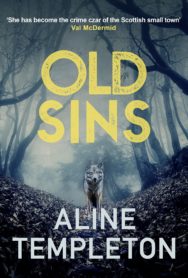 On a clear, moonlit night, DCI Kelso Strang stepped outside the bothy on Suilven and heard, faint but unmistakable, the howl of a wolf. An unsettling sound, but not the only unsettling thing about the remote township of Inverbeg, where he is taking a break with an old army friend.

Sean Reynolds is obsessive about rewilding his Auchinglass estate and there are rumours that he’s taken illicit steps to hurry that on, to the anger of the local farmers. There are other tensions too. An elderly lady had died some months before, officially in a tragic stumble off a cliff path but she was a woman burdened with many secrets and her closest friend believes her death was not an accident, but retribution.

Aline Templeton lives in Edinburgh with her husband and their Dalmatian dog. She has been Chair of the Society of Authors in Scotland and has been made the first Crime Writer’s Association’s Bookseller’s Champion.