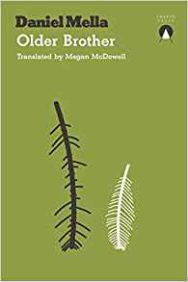 During the summer of 2014, on one of the stormiest days on record to hit the coast of Uruguay, 31-year old Alejandro, lifeguard and younger brother of our protagonist and narrator, dies after being struck by lightning. This marks the opening of a novel that combines memoir and fiction, as it unveils an urgent exploration of the brotherly bond, and the effects that death can have on our most intimate circles as well as on ourselves.

Can grief be put into words? Can we truly rationalise death and cohabit with it? Pain can only really be described in the past, not in the present; however, Mella chooses to narrate it in the future, as if all calamities are yet to unfold.

In a style that is reminiscent of that of Bret Easton Ellis and J.D. Salinger, and which in parts recalls David Cronenberg’s or Anthony Burgess’s examination of violence in society, Mella takes us with him in this dizzying journey right into the centre of his own neurosis and obsessions, where fatality is skilfully turned into an absorbing experience and a meditation on love, relations, grief, art and beliefs. A book impossible to put down.

Daniel Mella (Montevideo, Uruguay, 1976) is one of the key figures of contemporary Uruguayan literature. At 21, he published Pogo (1997), his first novel, which would be followed by Derretimiento (1998), recently republished in Spain, Noviembre (2000) and the book of short stories Lava (2013), awarded the Bartolomé Hidalgo Prize, the most prestigious literary prize in Uruguay. El hermano mayor is his latest book and it has been praised by critics in Uruguay, Argentina and Spain. It has also won the Bartolomé Hidaldo Prize (2017).