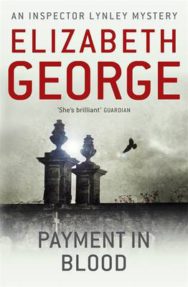 An isolated Scottish mansion is the venue for a reading of a controversial new play by a West End theatre company. But on the very first evening, the playwright is savagely murdered, and Inspector Thomas Lynley faces the most testing case of his career. For one of the suspects is Lady Helen Clyde, the woman Lynley loves. And as he attempts to untangle the family scandals, fierce theatrical rivalries and long-buried secrets that beset the case, Lynley struggles to balance the clinical detachment of his job with the intensity of his feelings.

Reviews of Payment in Blood

A treat – splendidly plotted and beautifully written Colin Dexter If Agatha Christie were writing today, this is how she'd do it. Good plot, credible characters and a very perceptive and observant female eye Ted Allbeury

Elizabeth George is the author of highly acclaimed novels of psychological suspense. She won the Anthony and Agatha Best First Novel awards in America and received the Grand Prix de Litterature Policiere in France. In 1990 she was awarded the prestigious German prize for international mystery fiction, the MIMI. Her novels have now been adapted for television by the BBC. An Edgar and Macavity Nominee as well as a New York Times and international bestselling author, Elizabeth George lives on Whidbey Island in the state of Washington. Visit Elizabeth’s website at www.elizabethgeorgeonline.com