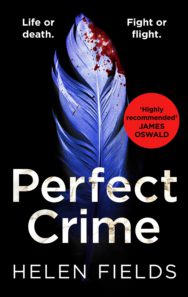 Your darkest moment is your most vulnerable…

Stephen Berry is about to jump off a bridge until a suicide prevention counsellor stops him. A week later, Stephen is dead. Found at the bottom of a cliff, DI Luc Callanach and DCI Ava Turner are drafted in to investigate whether he jumped or whether he was pushed…

As they dig deeper, more would-be suicides roll in: a woman found dead in a bath; a man violently electrocuted. But these are carefully curated deaths – nothing like the impulsive suicide attempts they’ve been made out to be.

Little do Callanach and Turner know how close their perpetrator is as, across Edinburgh, a violent and psychopathic killer gains more confidence with every life he takes…

An unstoppable crime thriller from the #1 bestseller. The perfect read for fans of Karin Slaughter and M. J. Arlidge.

Helen Fields’ first love was drama and music. From a very young age she spent all her free time acting and singing until law captured her attention as a career path. She studied law at the University of East Anglia, then went on to the Inns of Court School of Law in London.

After completing her pupillage, she joined chambers in Middle Temple where she practised criminal and family law for thirteen years. Undertaking cases that ranged from Children Act proceedings and domestic violence injunctions, to large scale drug importation and murder, Helen spent years working with the police, CPS, Social Services, expert witnesses and in Courts Martials.

After her second child was born, Helen left the Bar. Together with her husband David, she went on to run Wailing Banshee Ltd, a film production company, acting as script writer and producer.

Helen self-published two fantasy books as a way of testing herself and her writing abilities. She enjoyed the creative process so much that she began writing in a much more disciplined way, and decided to move into the traditional publishing arena through an agent.

Perfect Remains is set in Scotland, where Helen feels most at one with the world. Edinburgh and San Francisco are her two favourite cities, and she travels whenever she can.

Beyond writing, she has a passion for theatre and cinema, often boring friends and family with lengthy reviews and critiques. Taking her cue from her children, she has recently taken up karate and indoor sky diving. Helen and her husband now live in Hampshire with their three children and two dogs.