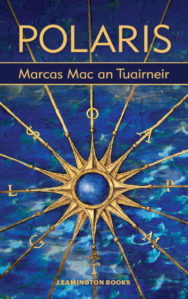 By (author) Marcas Mac an Tuairneir

Polaris is the fourth collection from award-winning Gaelic- and English-language poet Marcas Mac an Tuairneir. Named for the North Star, the collection builds on intersecting notions of ‘northness’ and linguistic and cultural identities – ‘Polaris’ means ‘languages’ in the gay cryptolect Polari. This ground-breaking new body of work harvests from a cross-section of folk narratives, historical accounts and current affairs, spanning the length and breadth of these islands – the Atlantic Archipelago.

Interrogating Unionist, Nationalist and regional models and tropes, the is literature of record, problematising mainstream narratives and seeking to uncover and foreground lost, unheard of, or otherwise marginalised voices. In this, the poetry is heavily indebted to feminist and post-colonial thought.

Inverting the current trend of publishing Gaelic poetry with the poet’s own translations, verso recto, Polaris includes reimaginings and reworkings of Marcas’ original works in many of the native minoritised languages of these islands: Scots, Irish, Manx, Welsh, Cornish and Jersey French, contributed by some of the their respective literatures’ finest poets and translators. Alongside them also feature translations into some of the languages of Europe, which also find a home here, as well as selected works in Polari, contributed by the poet himself.