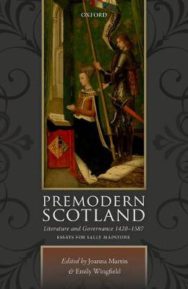 Joanna Martin is Associate Professor of Middle English and Older Scots at the University of Nottingham, having been a Darby Fellow at Lincoln College, Oxford. She has published on aspects of Middle English writing, including that of Gower and Lydgate, on Anglo-Scottish literary relations, and on Older Scots literary and book history. She is the author of Kingship and Love in Scottish Poetry (Ashgate, 2008) and The Maitland Quarto: A New Edition ofCambridge, Magdalene College, Pepys Library MS 1408, published for the Scottish Text Society in 2015.Emily Wingfield is a Lecturer in English at the University of Birmingham. Previously she held a Junior Research Fellowship at Churchill College, Cambridge, and completed her D.Phil. on ‘The Manuscripts and Print Contexts of Older Scots Romance’ at Oxford. She has published widely on Older Scots romance and book history, and completed a monograph on The Trojan Legend in Medieval Scottish Literature (D.S. Brewer, 2014).