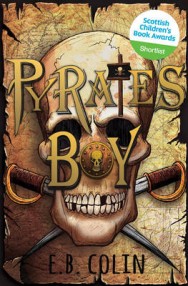 Shortlisted for the Scottish Children’s Book Awards 2015 ‘The boy looks about seven or eight years old and should weigh next to nothing. And yet it takes four men to drag him out of the water. We soon realise why. Padlocked around his ankle is a thick metal chain, which plummets right down to the sea’s bottom. If we want to save him, we have to pull up the chain. And whatever is at the end of it.’ Silas Orr, an 11-year-old runaway from Greenock, is saved from certain death by Captain Jon Harkin, aka the infamous pirate Black Johnnie. Choosing to stay aboard, he becomes pirate’s boy on the feared ship Tenacity. Now the crew have rescued another drowning boy, but this one has a lead box chained to his ankle. What could be precious enough to keep safe with a human buoy? Whatever it is, someone will come looking for it. Silas must help Johnnie discover the child’s secret and outwit their pursuers. But life on the high seas isn’t easy. Silas’ adventures become more and more dangerous as he escapes from an erupting volcano, navigates through treacherous coral reefs, and encounters a knifewielding, cartwheeling girl.The pirates’ exploits take them from Jamaica to Glasgow — but what awaits Silas there?

E. B. Colin lives in Glasgow. A former journalist, she now lectures in Creative Writing at Strathclyde University while writing novels and short stories for children and adults, and BBC radio plays. Her work has been shortlisted for a British Book Award, a Saltire Award and a Scottish Arts Council Book of the Year Award.