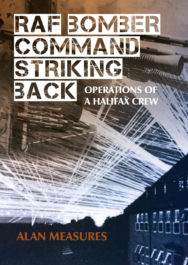 RAF Bomber Command Striking Back: Operations of a Halifax Crew

In the early hours of 26th June 1942, six airmen from 102 Squadron return from Bremen in their Halifax, Q for Queenie, having taken part in the third Thousand Bomber Raid. These airmen formed a truly international crew, each one having an interesting back story that had led to their being together. As operations continue, events on the squadron are recounted and German defences develop into a coherent barrier known as the Kammhuber Line.

In May 1942 102 Squadron is a part of the huge effort required to support the first of Air Marshal Arthur Harris’ Thousand Bomber Raids to Cologne, followed by a massed attack on Essen and then the final raid to Bremen.

This is an incisive look at the RAF’s bombing campaign during 1941–42 through the prism of a multinational crew which faced mounting risks from an increasingly organised and integrated German air defence capability.