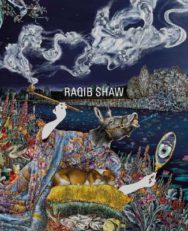 Raqib Shaw is one of the most extraordinary and sought-after artists working in the world today. Born in Calcutta in 1974 and raised in Kashmir, he came to London to study in 1998 and has lived there ever since. Inspired by a broad range of influences, including the old masters, Indian miniatures, Persian carpets and the Pre-Raphaelites, his paintings are infused with memories and longing for his homeland in Kashmir. His technique constitutes a completely unique kind of enamel painting. Spending months on preparatory drawings, tracings and photographic studies, he then transfers the composition onto prepared wooden panels, establishing an intricate design with acrylic liner, which leaves a slightly raised line. He adds the enamel paint using needle-fine syringes and a porcupine quill, with which he manoeuvres the paint. The finished works are intricate, magical and breathtaking in their colour and complexity.This book accompanies an exhibition of eight paintings by Raqib Shaw at the Scottish National Gallery of Modern Art, alongside two paintings which have long obsessed him and have influenced specific works: Sir Joseph Noel Paton’s The Quarrel of Oberon and Titania, 1849 (National Gallery of Scotland) and Lucas Cranach’s An Allegory of Melancholy, 1528 (private collection). The book includes the first full-length biographical study of the artist.

Patrick Elliott is Senior Curator at the Scottish National Gallery of Modern Art and author of the highly successful True to Life and Joan Eardley: A Sense of Place.