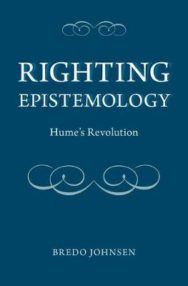 David Hume launched a historic revolution in epistemology when he showed that our theories about the world have no probability relative to what we think of as our evidence for them, hence that the distinction between justified and unjustified theories does not lie in their different probabilities relative to that evidence. However, allies in his revolution appeared only in the 20th century, in the persons of Sir Karl Popper, Nelson Goodman and W. V. Quine. Hume’s second great contribution to the field, which remains unrecognized to this day, was to propose what is now known as reflective equilibrium theory as the framework within which justified and unjustified theories are rightly distinguished. The core of this book comprises an account of these developments from Hume to Quine, an extension of reflective equilibrium theory that renders it a general theory of epistemic justification concerning our beliefs about the world, and an argument that all four of these thinkers would have endorsed that extension.In chapters on Sextus, Descartes, Wittgenstein’s On Certainty, and other aspects of Hume’s epistemology I defend new readings of those philosophers’ writings on skepticism and note significant relationships among their views on matters bearing on the Humean revolution. Finally, in chapters on Hilary Putnam’s “Brains in a Vat” and Fred Dretske’s contextualism – the only promising version of that view – I show that both fail to rule out the possible truth of radical skeptical hypotheses. This is not surprising, since those hypotheses are in fact possible. They are not, however, of any epistemological significance, since the justification of our beliefs about the world is a function of the extent to which bodies of beliefs to which they belong are in reflective equilibrium, and no extant conception of knowledge is of any epistemological interest.

Professor of Philosophy, University of Houston