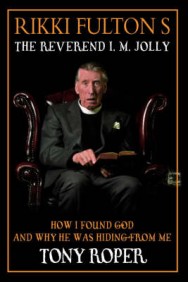 Home > Fiction from Scotland > Rikki Fulton’s Reverend I.M.Jolly: Bk.1: How I Found God, and Why He Was Hiding from Me

Rikki Fulton’s Reverend I.M.Jolly: Bk.1: How I Found God, and Why He Was Hiding from Me

The Rev I. M. Jolly is one of the funniest and most enduring television characters ever created, brought to life by Scotland’s best-loved comedian Rikki Fulton. Everyone has their favourite sketch, their favourite line or their funniest Jolly moment. But beyond the glamour of LAST CALL and away from the cameras, the Rev I. M. Jolly has a problem. Attendances at his regular Sunday services have slipped to a record low, and the Synod are not pleased. And when an ultimatum arrives in the post telling him he has one year to get bums on pews or he’ll be looking for other employment, Jolly realises it’s going to be hard work. But should he tell his wife, the dreaded Ephesia, or will that only make things ten times worse? How I Found God, and Why He Was Hiding From Me is the hilarious story of the Reverend I. M. Jolly, created by Rikki Fulton and brought to life by award winning writer Tony Roper.Follow Jolly’s adventures as he nearly wins the lottery, thinks Ephesia has a fancy man, visits Erica’s Erotic Massage Parlous, can’t seem to get anyone to come to church on a Sunday, even if he pays them, and contemplates a life of unemployment, indolence and even more misery – if that’s actually possible.

RIKKI FULTON is one of Scotland’s best-loved entertainers. From his early days compering for the great dance bands of the 1950s, to classic comedy performances in Francie & Josie and Scotch & Wry, his best-selling autobiography Is It That Time Already? confirmed him as one of the country’s biggest stars. Author of Bafta award winning play The Steamie, and star of numerous radio and TV programmes, TONY ROPER appeared with Rikki Fulton in many of the most memorable sketches in Scotch & Wry. He is perhaps best known for his portrayal of Jamesie Cotter in the legendary Rab C Nesbitt.