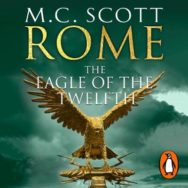 Home > Fiction from Scotland > Rome: The Eagle Of The Twelfth: (Rome 3): A action-packed and riveting historical adventure that will keep you on the edge of your seat

Rome: The Eagle Of The Twelfth: (Rome 3): A action-packed and riveting historical adventure that will keep you on the edge of your seat

Brought to you by Penguin.From the Sunday Times bestselling author Manda Scott, a captivating, stirring and breath-taking historical adventure full of honour, loyalty and bravery. Perfect for fans of Simon Scarrow, Robert Harris and Conn Iggulden.THEY ARE KNOWN AS THE LEGION OF THE DAMNED…Throughout the Roman Army, the brutal XIIth Legion is notorious for its ill fortune. For one young man, Demalion of Macedon, joining it will be a baptism of fire. And yet, amid all of the violence and savagery of his life as a legionary, he will come to love the Twelfth and the bloody-minded, dark-hearted soldiers he calls his brothers.But during the punishing Judaean campaign, the Hebrew army inflict a catastrophic defeat upon the legion – not only decimating their ranks, but taking away their soul – the eagle.There is just one final chance to save the legion’s honour – to steal it back. To do that, Demalion and his legionnaries must go undercover into Jerusalem, into the very heart of their enemy.Recovering their pride is paramount but discovery will mean the worst of deaths…”A tale that shines like the Eagle at its heart. I suspect that no one else writes like M. C. Scott. I’m certain plenty wish they could.” — GILES KRISTIAN”Enthralling…Gladiator meets Tinker Tailor Soldier Spy in a baroque landscape.” — ROBERT LOWE”Compulsive reading” — ***** Reader review(c) Manda Scott 2012 (P) Penguin Audio 2021

Over the past two decades Manda Scott has brought iconic historical figures back to life, reimagined and re-booted for the twenty-first century. Her crime novels have been shortlisted for many awards including Hen’s Teeth for the Orange Prize and No Good Deed for an Edgar Award. Her work has been translated into over twenty languages.Manda’s bestselling Boudica series was recently optioned for television.