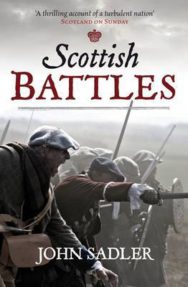 Scottish history has been shaped and defined by a series of great battles. John Sadler gives the first full military history of Scotland for many years. From Mons Graupius to Culloden, he shows how terrain and politics shaped the campaigns and decisive engagements we still remember today. Each chapter also features sections on the development of warfare – its tactics, equipment and styles of fighting. For the military historian, Scotland is a fascinating example of how a small country can fight off domination by a far larger neighbour. From Celtic warfare to the feudal host to the professional armies of the eighteenth century, from guerrilla warfare to the pitched battle, from siege to Border Reiver, Scotland is unique in having had almost every major type of warfare taking place within its frontiers. Battles such as Bannockburn, Flodden, and Culloden, have a resonance and impact far beyond Scotland. John Sadler weaves chronicle, narrative, and analysis together in a masterly way, recreating the drama and passion of centuries past.

'A thrilling account of a turbulent nation' – Scotland on Sunday