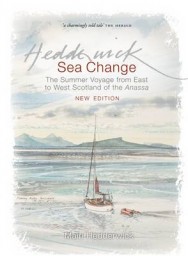 Sea Change: The Summer Voyage from East to West Scotland of the Anassa

In Sea Change, writer and artist Mairi Hedderwick embarks on a six-week summer voyage from the east to the west of Scotland in the antique teak, 26-foot long cruising yacht the Anassa, sailing through the Caledonian Canal to the fjords of the west: and visiting, among others, Lochs Linnhe, Etive, Ailort, Moidart, Nevis and Leven. Filled with frank and fresh observations on life, land and seascape and augmented with her own drawings, fold-out watercolours and observations on everything from the history of landscape painting in Scotland to the shipping forecast and fish farming, this is an exquisite account of a wonderful journey around Scotland.

Mairi Hedderwick was born in Gourock, Scotland. As a student she took a job as a mother’s help on the Isle of Coll in the Hebrides, beginning a life-long love affair with islands and their small communities. Her children were brought up there and now some of her grandchildren. Mairi’s island world is delightfully reflected in the imaginary island of Struay where her perennially popular Katie Morag stories are set. As well as creating children’s books Mairi writes and illustrates travel books for adults, including Highland Journey and Eye on the Hebrides (Birlinn 2009). She also illustrated the acclaimed Janet Reachfar books, which are published by Birlinn. She continues to live on Coll.