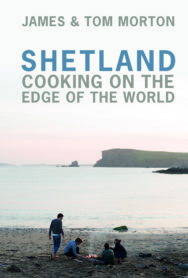 Home > Food & Drink > Shetland: Cooking on the Edge of the World

Shetland: Cooking on the Edge of the World

Shetland is where Scotland meets Scandinavia and the North Sea hits the Atlantic Ocean. Isolated, unspoilt and rich in history and tradition, Shetland is a truly singular place.James Morton grew up there. Co-written with his father, broadcaster and journalist Tom Morton, Shetland: Cooking on the Edge of the World explores life on an island with food, drink and community at its heart.Surrounded by crystal-clear waters, Shetland seafood is second to none, and butter and cheese are made locally. The native lamb roams freely around the island, and the Shetland black potato cannot be found anywhere else in the world. Here cooks, farmers, crofters and fishermen toil following traditions that go back hundreds of years.The recipes take in the very best that the isles have to offer, from celebratory feasts (the tradition of “foy”) through the food of the sea – mackerel, mussels, salmon – to treasures from the land (lamb, venison, beef) and earth. There’s cooking born from necessity and thrift – smoking and preserving (home-smoked halibut, pickles) – and it simply wouldn’t be Scottish without baking (bannocks, oatcakes, afternoon cakes and biscuits) and, of course, a wee dram.With spectacular photography throughout, and features on crofting, pit feasting and the annual Fire Festival, Up Helly Aa (which culminates in the burning of a Viking galley ship), Shetland: Cooking on the Edge of the World celebrates a very different kind of island paradise.

James Morton is the author of books including Brew (2016) and Brilliant Bread, which won the Guild of Food Writers Cookbook of the Year award in 2014. In 2012 he reached the final of BBC TV’s Great British Bake Off. He works as a doctor in Glasgow, owns a brewery in the city, and has won several national home brewing awards.Tom Morton is a writer and broadcaster. He hosted his own show on BBC Radio Scotland for 20 years and is a former journalist on publications including the Daily Express, Sunday Express, Sunday Herald and New Statesman. Tom is the author of Shetland: Tales from the Last Bookshop, and lives in Shetland. He is James’s dad.