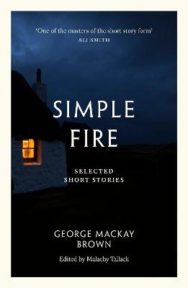 George Mackay Brown was a master of the short story form and produced a steady stream of short fiction collections, starting with A Calendar of Love (1967) and include A Time to Keep (1969) and Hawkfall (1974), as well as his poetry collections and novels. In this selection, edited and introduced by Malachy Tallack, we explore the author’s Orkney and the ups and downs of the crofters and fishermen there. These magical stories, drawn from ancient lore and modern life, strip life down to the essentials.

'New editions of his poetry and short stories, published to mark his centenary, show his spirituality and extraordinary gift for 'involved detachment'' * The Spectator * 'Malachy Tallack and Kathleen Jamie do an excellent job in editing these collections for the centenary of MacKay Brown's birth. They choose both poems and stories that show the appeal and strength of his writing' — Donald Murray * Stornoway Gazette * 'Tallack writes beautifully about living on the edge of the world; he understands islands, the way they are silent and also impossibly loud and full. He comes at Brown with real empathy. … For newcomers to George this collection is a good introduction' — Morag Macinnes * The Tablet *

George Mackay Brown (1921-96) was one of the twentieth century’s most distinguished and original writers. His lifelong inspiration and birthplace, Stromness in Orkney, moulded his view of the world, though he studied in Edinburgh and later at Newbattle Abbey College. He produced a regular stream of publications from 1954 onwards. These included A Calendar of Love (1967), A Time to Keep (1969), Greenvoe (1972), Hawkfall (1974), and, notably, the novel Beside the Ocean of Time (1994), which was shortlisted for the Booker Prize and won the Saltire Book of the Year.Malachy Tallack has written for the New Statesman, the Guardian, the Scottish Review of Books, Caught By the River and many other publications, online and in print. He won a New Writers Award from the Scottish Book Trust in 2014, the Robert Louis Stevenson Fellowship in 2015, and is the author of the acclaimed Sixty Degrees North. He is from Shetland, and currently lives in Glasgow.