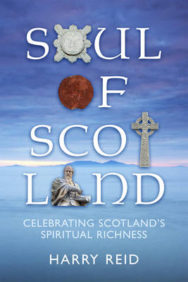 Religion is at the very core of Scotland’s turbulent, action-packed history and its unique cultural heritage. Indeed, you could argue that Scotland has been, for most of the past 1600 years, an intensely religious country. It is home to some of the most significant early Christian art anywhere in the entire world, and has an amazing 53 cathedrals. In a fast-paced and enthralling epic celebration of Scotland’s spiritual heritage, this amazing voyage of discovery reveals that there are echoes of the upsides and downsides of religion everywhere. The distinctive spiritual beauty of Scotland is inspiring and to be found in the most unexpected places. The author also casts a canny eye over some ever-controversial issues such as witchcraft, sectarianism, the Clearances and the DIsruption. Other topics include the Isles, literature, the differences between Edinburgh and Glasgow, Calvanism, Margaret Thatcher, the Declaration of Arbroath, The National Covenant, church buildings, special spiritual sites, spiritual leaders, kings and queens, little-known influential women, religious revivals, Celtic Christianity – and many other elements of the diverse essence of spiritual Scotland.Scotland’s Christianity always mixed with politics and was a key part of our national identity…until now, that is. Now Scotland is an apparently secular country, often oblivious to its Christian foundations. Can Christianity be revived in Scotland – or is it dead and buried for ever? Harry Reid has some controversial and perhaps surprising answers.

HARRY REID is generally regarded as a key ‘Go To’ person for comments on Scottish events and religious affairs and appears on Scottish current affairs programmes regularly. He is the former Editor of The Herald. As author of Outside Verdict and Reformation, he is popular and highly respected for his insightful, absorbing and incisive comments.