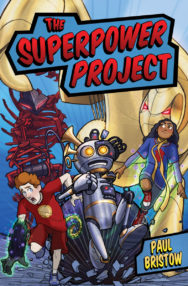 With the help of a wisecracking, steampunk robot, two friends discover that they have inherited some amazing, if unusual, abilities. Computer whiz Megan can fly (mostly sleep-flying, but she’s working on it) while her best friend Cam can (in theory) transform into any animal, but mostly ends up as a were-hamster.

Together they must protect the source of their ancestral powers from a wannabe evil mastermind and his gang of industrial transformer robots who’ve disguised themselves as modern art installations on their Greenock estate.

It isn’t easy to balance school and epic super-battles, not to mention finding time to search for other super-talents and train with their Mr Miyagi-esque were-tiger coach.

Can Megan and Cam beat the bad guy, defeat his robot transformers and become the superheroes they were born to be?

Paul Bristow has written for radio and television as well as running community projects, including the development of a social enterprise to encourage the use of graphic novels in the classroom. His first children’s novel, The Superpower Project, was shortlisted for the Kelpies Prize 2014. Paul is fascinated by Scotland’s mysterious history, including that of his hometown of Greenock, Scotland, where, in his day job, he manages a (supposedly) haunted building. If he could have a superpower of his own, it would be reverse parking.