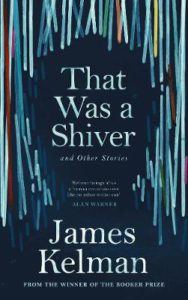 Home > Fiction from Scotland > That Was a Shiver, and Other Stories

That Was a Shiver, and Other Stories

A trucker passes through a town he used to know and a local tries to sell him his sister; a couple put their children to bed and hear a loud scratching at the wall; a Principal and his associate examine the dead body before them; a man looks into a mirror and reflects on becoming more like his father. Sparky, touching and brilliantly daring, these stories uncover human feeling in the ordinary and the everyday, and are a reminder of Kelman’s exceptional talent.

Reviews of That Was a Shiver, and Other Stories

Kelman brings alive a human consciousness like no other writer can — ALAN WARNER PRAISE FOR THE STORIES OF JAMES KELMAN: Tender and funny in a way that may surprise those who know him only by reputation * Daily Telegraph * A rollicking, riveting read … Kelman's language of inner thought is so fluid and immediate it reads more like breath than words * Daily Herald * The mixture of the precisely but surreally bureaucratic and the casually macabre is perfectly judged * Sunday Times * You only have to read one phrase to recognise his utterly distinctive voice: lyrical, philosophical as a pub stool resident and steeped in the street … The result, for those who take words seriously, is canonical and pure joy * Metro * Kelman's language is immediately exciting; like a musician, he uses repetition and rhythm * New Yorker * Kelman portrays his world with bleakly beautiful honesty * The Times * An underrated feature of Kelman's work has been his capacity for depicting tenderness — Stuart Kelly * Scotland on Sunday * As well as being a keen observer of society's underclasses and disenfranchised, Kelman also has a great eye for the absurdity of everyday life, something which comes to the fore in this collection * Independent on Sunday * Kelman excels at describing inner-city squalor * Sunday Times *