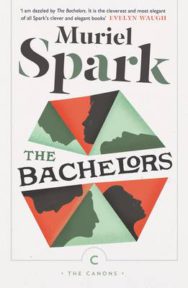 Home > Fiction from Scotland > The Bachelors

The Bachelors displays the best of Sparkian satire, placing her at the heart of a great literary tradition alongside Waugh and Trollope, Wilde and Wodehouse. It demands rediscovery. “It’s easy to see why Waugh admired The Bachelors. On one level, it is a blithely carnivorous satire in the Waugh mould. The bachelors of the title – almost the only men we meet in the narrative – are the thirty-something male barristers, teachers, journalists and museum attendants of a small patch of West London. They lead inturned, doddery, superannuated lives, pottering between grocers, coffee-houses, bedsits and the houses of their mothers and aunts. But the comedy here is serious in a way that Waugh’s satanically energetic comedies of misery rarely are…comedies of English manners have seldom been darker.” (Daily Telegraph). “My admiration for Spark’s contribution to world literature knows no bounds. She was peerless, sparkling, inventive and intelligent – the creme de la creme.” (Ian Rankin). “Muriel Spark’s novels linger in the mind as brilliant shards, decisive as a smashed glass is decisive.” (John Updike, New Yorker).