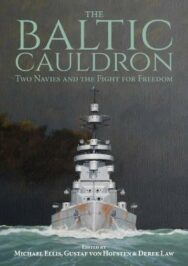 Home > History > The Baltic Cauldron: Two Navies and the Fight for Freedom

The Baltic Cauldron: Two Navies and the Fight for Freedom

This is a history of navies in the Baltic Sea and its approaches, from the Skaggerak to the Gulfs of Bothnia and Finland. Throughout history, navies have naturally supported civil society and the prosperity that international trade brings.Two navies in particular have played a significant role in the Baltic and this book portrays the relationship between the Swedish and British Navies over the centuries. In the 1700s Britain was a global naval power and developed doctrine, ships and culture which were copied by others, but the relationship with Sweden became special. While Britain and its navy depended upon Baltic Sea trade for timber, tar, iron and cereals, the foundation was laid for the Swedish Navy, its self-image, tactics, materials and traditions.Many of these interactions have centred around thrilling, colourful, strong individuals, and many are the stories of how their good sense and good judgement created friendship and trust, rather than discord and conflict. These collected accounts demonstrate how British naval officers have had an influence on the development, not only of the Swedish Navy, but also of Sweden itself. Only once during the centuries have the two countries been officially at war with each other, but not a shot was fired.

Commander Michael Ellis, RN served onboard every type of surface ship, including the battleship HMS Vanguard during his long career. He was Naval Attache Stockholm, a founder member of the Anglo-Swedish Naval History Society, and also co-authored I Fred och OErlog.Commodore Gustaf von Hofsten, RSwN served in ships and staffs in the Royal Swedish Navy, and as Marshal of the Royal Court. He co-edited the maritime history books Kustflottan and I Fred och OErlog.Emeritus Professor Derek Law is a former Secretary and Vice-President of the Society for Nautical Research and also of the Navy Records Society. He is the author of The Royal Navy in World War II.