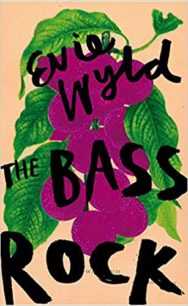 Surging out of the sea, the Bass Rock has for centuries watched over the lives that pass under its shadow on the Scottish mainland. And across the centuries the fates of three women are linked: to this place, to each other.

In the early 1700s, Sarah, accused of being a witch, flees for her life.

In the aftermath of the Second World War, Ruth navigates a new house, a new husband and the strange waters of the local community.

Six decades later, the house stands empty. Viv, mourning the death of her father, catalogues Ruth’s belongings and discovers her place in the past – and perhaps a way forward.

Each woman’s choices are circumscribed, in ways big and small, by the men in their lives. But in sisterhood there is the hope of survival and new life. Intricately crafted and compulsively readable, The Bass Rock burns bright with anger and love.

Evie Wyld’s debut novel, After the Fire, A Still Small Voice, was shortlisted for the Impac Prize and awarded the John Llewellyn Rhys Prize. Her second, All the Birds, Singing, won the Miles Franklin Prize, the Encore Prize and the EU Prize for Literature, and shortlisted for the Costa Best Novel awards. In 2013 she was named as one of Granta’s Best of Young British Novelists, having previously been named by the BBC as one of the twelve best new British writers. She lives in Peckham.