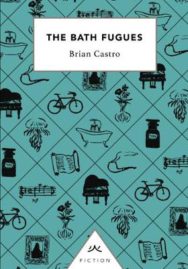 The Bath Fugues is Castro at his best, in a wonderful performance wrought from intrigue, romance, deception and comedy. The book is composed of three interwoven novellas, the first centred on an ageing art forger; the second on a Portuguese poet, opium addict and collector; the third told by a well-connected doctor, with a cabinet of venom, and an art gallery on the north Queensland coast. Around these characters circle others, in the contrapuntal manner of the fugue suggested by the book’s title. Some are related, some fugitive, some like the essayist Montaigne, the poet Baudelaire or the philosopher Benjamin, enter the story from the past.Motifs recur – baths, bicycles, clocks, addiction, the counterfeit – deepening the lines of association and inheritance which bind their lives, and giving weight to the friendships thrust upon them.

Brian Castro is one of Australia’s most celebrated writers. Acknowledged for his prose style and brilliant use of language, Castro’s work has received wide critical acclaim and won major Australian literary prizes. Three of his works have been awarded the Victorian Premier’s Literary Award. In 2014, Castro was given the Patrick White Award for Literature for his contribution to Australian Literature.