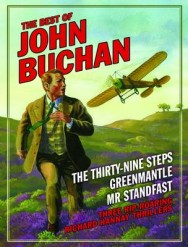 Long before James Bond was born, the man of action to whom His Majesty’s Government turned when there was a devious espionage ring to be infiltrated or an evil international super-spy to be brought to justice, was Richard Hannay. The most famous fictional creation of author, politician and statesman John Buchan, Hannay averted disaster for king and country on many occasions, being hounded by ruthless villains from Scotland to the Swiss Alps and the wilds of Turkey in the process.Together in this one epic volume are his three thrilling First World War adventures comprising: “The Thirty-Nine Steps” – Richard Hannay first becomes involved in the despicable skullduggery of a German spy network, battling to expose them while wanted by the police for a murder he didn’t commit and pursued by the enemy in one of the greatest man-hunts ever; “Greenmantle” – Just as he finishes convalescing from wounds received on the battlefield in France, Hannay, now Major Hannay, is reunited with some old friends and sent to thwart German plans to instigate a holy war in the Middle East; and, “Mr Standfast” – Drafted back into the Secret Service once more and working undercover as a pacifist to bring down German operation in Britain, Hannay comes up against the enemy’s most cunning master spy, meeting the love of his life along the way. For thriller fans who have fought the Boche with Richard Hannay before, this collection puts you right back in the firing line, and for anyone who’s used to seeing their secret agents weighed down by gadgets and gizmos, Hannay shows you how a real man survives with just skill, determination and sheer guts.

John Buchan, 1st Baron Tweedsmuir was born in Perth in Scotland in 1875. He studied at Glasgow University and Oxford and embarked on a career as a diplomat and politician. He was also a prolific author, writing many volumes of historical fiction, non-fiction and biography. Buchan became the 15th Governer General of Canada in 1935, a position he held until his death in 1940.