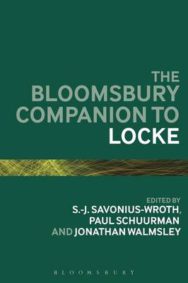 Home > Academic > Arts and Humanities > The Bloomsbury Companion to Locke

The Bloomsbury Companion to Locke

John Locke (1632-1704) was a leading seventeenth-century philosopher and widely considered to be the first of the British Empiricists. One of the most influential Enlightenment thinkers, his major works and central ideas have had a significant impact on the development of key areas in political philosophy and epistemology.The Bloomsbury Companion to Locke is a comprehensive and accessible resource to Locke’s life and work, his contemporaries and critics, his key concepts and enduring influence. Including more than 80 specially commissioned entries, written by a team of leading experts, topics range from absolutism to toleration, from education to socinianism. The Companion features a series of indispensable research tools including a chronology of Locke’s life, an A-Z of his key concepts and synopses of his principal writings.This is an essential resource for anyone working in the fields of Locke Studies and Seventeenth-Century Philosophy.

Reviews of The Bloomsbury Companion to Locke

A useful addition to current scholarly literature on Locke for students and professional philosophers alike … ranging over more of Locke's work than is usual in such a companion, being distinctive in its aims and organisation, and providing very full coverage of the historical background to and reception of Locke's thought. * Locke Studies * The Continuum Companion is encyclopaedic not just in format but in range… The editors have assembled a truly international team of scholars capable of writing authoritatively about topics as diverse as Socinianism and the reform of the coinage… This volume is indeed a generally faithful companion to Locke studies which even serious scholars will be glad to have by their side. * British Journal for the History of Philosophy * This is an extremely useful volume, both for the student and for the researcher, and could be used as a helpful support for those teaching in higher education. * History * This new volume is appropriate for advanced researchers looking into Locke's non philosophical interests and the intellectual climate that formed and was formed by his work. Summing Up: Recommended. Graduate students and researchers/faculty. — CHOICE

S.-J. Savonius-Wroth is a historian at the University of Helsinki, Finland and is a Research Fellow of the Academy of Finland.Paul Schuurman is Assistant Professor at the Faculty of Philosophy of the Erasmus University Rotterdam, the Netherlands.Jonathan Walmsley has a PhD in Philosophy from King’s College London, UK, and has published extensively on Locke’s natural philosophy.