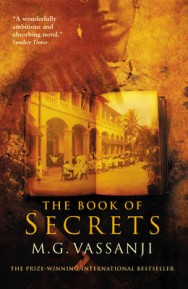 Home > Fiction from Scotland > The Book of Secrets

The Book of Secrets

When Pius Fernandes, a retired schoolteacher living in modern day Dar es Salaam, discovers a diary of a British colonial administrator from 1913, he is drawn into a provocative account of the Asian community of East Africa, and the liaisons, feelings and secrets of its people, over the course of a century. Part generational history, part detective story, part social chronicle, M.G. Vassanji’s award-winning novel magnificently conjures setting and period as it explores notions of identity and exile.

Reviews of The Book of Secrets

"A wonderfully ambitious and absorbing novel… by turns detective story, family saga, history… a rich evocative meditation on how and why stories are written." Sunday Times "Vassanji captures a wide and authentic perspective that ranks with VS Naipaul and Graham Greene." THE TIMES "Written with a subtle pen and a compassionate eye… an unusual and satisfying read." Sunday Telegraph"

M G Vassanji was born in Kenya and raised in Tanzania. Before moving to Canada in 1978, he attended MIT and was later writer in residence at the University of Iowa. The author of five acclaimed novels and a collection of short stories, he is the only writer to have won Canada’s most prestigious literary award, the Giller Prize, twice. He lives in Toronto.