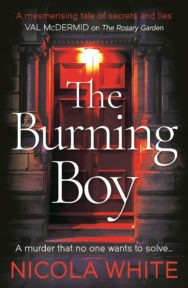 Home > Fiction from Scotland > Crime and Mystery > The Burning Boy

A dead police officer. A murder that no-one wants to solve…

Dublin, 1986. The murder of an off-duty officer in Phoenix Park should have brought down the full power of the Dublin police force. But Kieran Lynch was found in a notorious gay cruising ground, so even as the press revels in the scandal, some of the Murder Squad are reluctant to investigate.

Only Detectives Vincent Swan and Gina Considine are determined to search out the difficult truth, walking the streets of nighttime Dublin to find Kieran’s lovers and friends. But Gina has her own secret that means she must withhold vital evidence. When a fire rips through Temple Bar and another man is killed, she must decide what price she is willing to pay to find a murderer.

A gripping mystery that will keep you hooked until the final page, perfect for readers of Val McDermid, Denise Mina, Tana French and Adrian McKinty.

Nicola White won the Scottish Book Trust New Writer Award in 2008 and in 2012 was Leverhulme Writer in Residence at Edinburgh University. The Rosary Garden won the Dundee International Book Prize, was shortlisted for the McIlvanney Prize, and selected as one of the four best debuts by Val McDermid at Harrogate. She grew up in Dublin and New York, and now lives in the Scottish Highlands.