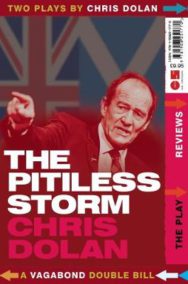 Home > Uncategorized > The Cause of Thunder / Pitiless Storm

The Cause of Thunder / Pitiless Storm

Two one-man plays written by Chris Dolan for David Hayman. The first, Pitiless Storm, was toured in the run-up to the 2015 Scottish independence referendum, and the second, The Cause of Thunder, will tour in February 2017. This is how the actor, David Hayman assessed the two plays: Pitiless Storm: “”while I was …chatting to my friend Chris Dolan during a break …I blurted out, ‘Chris, we have to tell our story about how, as lifelong labour supporters and committed socialists we have reached the stage where we are excited about the possibility of an independent Scotland.’ I wanted to make a creative contribution to the debate as a performing artist, and Chris was keen to work with me on a one-man show. Together we came up with the story of a dyed-in-the-wool Labour man who goes through a crisis of conscience and ends up voting for Independence.”” The Cause of Thunder: “”It is two years since the referendum, our world has changed dramatically and perhaps tragically for the worst since then; our dreams of removing ourselves from this madness are still there and getting stronger. Can one old man facing retirement, Bob Cunningham, find the words and the stories to shape those dreams?I hope so, but will have to wait until February and the start of our tour before those waves of energy from my audiences give me the answer.””

Chris Dolan writes for page, stage and screen. Already winner of Macallan short story prize, Dolan was shortlisted for the Saltire First Book Award in 1995 for Poor Angels and Other Stories. His first novel, Ascension Day, won the McKitterick Prize in 1999. Vagabond Voices published Redlegs in 2012, his first Maddy Shannon mystery, Potter’s Field in 2014, and his “”Arabian night””, Aliyyah in 2015. His non-fiction books include An Anarchist’s Story. The Life of Ethel Macdonald, and John Lennon. The Original Beatle. Dolan has written extensively for radio and television, both drama and documentary, including An Anarchist’s Story, and a history of poor whites in the Caribbean, Barbado’ed.