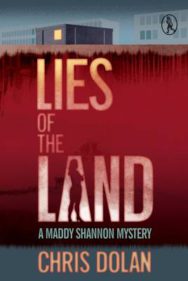 Home > Fiction from Scotland > Lies of the Land

Lies of the Land

Procurator fiscal Maddy Shannon awakens in her West End Glasgow flat to a hangover and several mysteries, starting with who is the strange man in her bed? Shortly after discovering the man’s identity, Maddy learns that his boss, a successful defence lawyer, was met a gruesome end in his posh Merchant City office. With a bad reputation for getting too close to her cases, Maddy tries to stand back from this one. But as the murders continue, and Maddy herself receives a disturbing message, she realises too close is unavoidable, and winds up in a race against the measured malevolence of an unknown killer. Maddy’s unorthodox meetings with Detective Inspector Alan Coulter further complicate an increasingly unmanageable case whose roots may go back to one Maddy failed to win. The suspects pile up until they finally topple. Chris Dolan’s follow-up to Potter’s Field is at once frightening and funny, earthy and insightful. It’s a love poem to Glasgow, a technicolour rendering of a city whose beauty lies in its many contradictory qualities.

Reviews of Lies of the Land

"Lies of the Land is utterly engrossing. Maddy is engagingly sexy and beautifully flawed. The characters are utterly believable and rooted in their cultures and class. Had me hooked right until the end. A humdinger of a story with Glasgow at its heart." – David Hayman

Chris Dolan writes for page, stage and screen. Already winner of Macallan short story prize, Dolan was shortlisted for the Saltire First Book Award in 1995 for Poor Angels and Other Stories. His first novel, Ascension Day, won the McKitterick Prize in 1999. Vagabond Voices published Redlegs in 2012, his first Maddy Shannon mystery, Potter’s Field in 2014, and his “Arabian night”, Aliyyah in 2015. His non-fiction books include An Anarchist’s Story. The Life of Ethel Macdonald, and John Lennon. The Original Beatle. Dolan has written extensively for radio and television, both drama and documentary, including An Anarchist’s Story, and a history of poor whites in the Caribbean, Barbado’ed.