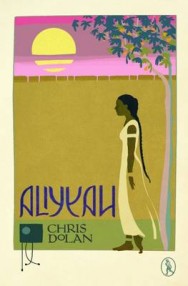 Captain Robert Haldane wakes up in a strange room, in an old house, surrounded by a beautiful but ramshackle orchard, miles from anywhere. The last thing he can remember is his helicopter being shot down over enemy territory. It appears he is in a safe house, cared for by an elderly holy man and his niece. But how did Haldane get there, and who are these people really? With time he suspects there is someone else in the house. The soldier tracks her down: Aliyyah, a beautiful young veiled woman. Is she, too, being kept against her will, or even her knowledge? And is there really a curse on this family?Aliyyah is a modern Arabian tale, set in an unnamed war-torn country. It is a Romeo and Juliet story, but one for an age where scientific materialism is crossing bloody swords with religion. What divides these two lovers is not the war outside, or the imminent arrival of Haldane’s troops, but how they interpret the world.

Chris Dolan writes for page, stage and screen. Already winner of Macallan short story prize, Dolan was shortlisted for the Saltire First Book Award in 1995 for Poor Angels and Other Stories. His first novel, Ascension Day, won the McKitterick Prize in 1999. In 2012, Vagabond Voices published Redlegs, and in 2014 his first crime novel, Potter’s Field.His non-fiction books include An Anarchist’s Story. The Life of Ethel Macdonald, and John Lennon. The Original Beatle. Dolan has written extensively for radio and television, both drama and documentary, including An Anarchist’s Story, and a history of poor whites in the Caribbean, Barbado’ed.