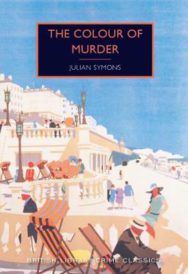 Home > Fiction from Scotland > The Colour of Murder

The Colour of Murder

John Wilkins meets a beautiful, irresistible girl, and his world is turned upside down. Looking at his wife, and thinking of the girl, everything turns red before his eyes – the colour of murder.Telling the story of a murder, a trial, and the subsequent psychiatric evaluation, this award-winning crime novel from 1957 is a gripping examination of the psychology of murder and the nature of justice.

Reviews of The Colour of Murder

`One of our most ingenious and stylish home-grown crime novelists' – Spectator; `A book to delight every puzzle-suspense enthusiast' – New York Times

Julian Symons (1912-1984) was a notable writer of British crime fiction from the 1950s until his death, publishing more than thirty novels in total. He served as President of the prestigious Detection Club, won two Edgar Awards from the Mystery Writers of America, and is well known as the author of Bloody Murder, a classic history of crime fiction.