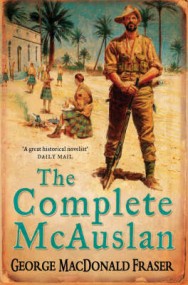 George MacDonald Fraser’s hilarious stories of the most disastrous soldier in the British Army – collected together for the first time in one volume. Private McAuslan, J., the Dirtiest Soldier in the Word (alias the Tartan Caliban, or the Highland Division’s answer to the Pekin Man) first demonstrated his unfitness for service in The General Danced at Dawn. He continued his disorderly advance, losing, soiling or destroying his equipment, through the pages of McAuslan in the Rough. The final volume, The Sheikh and the Dustbin, pursues the career of the great incompetent as he shambles across North African and Scotland, swinging his right arm in time with his right leg and tripping over his untied laces. His admirers know him as court-martial defendant, ghost-catcher, star-crossed lover and golf caddie extraordinary. Whether map-reading his erratic way through the Sahara by night or confronting Arab rioters, McAuslan’s talent for catastrophe is guaranteed. Now, for the first time, the inimitable McAuslan stories are collected together in one glorious volume.

Reviews of The Complete McAuslan

'It's great fun and rings true: a Highland Fling of a book' Eric Linklater 'Twenty-five years have not dimmed Mr Fraser's recollections of those hectic days of soldiering. One takes leave of his characters with real and grateful regret' Sir Bernard Fergusson, Sunday Times