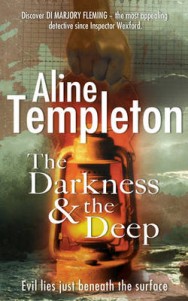 Home > Fiction from Scotland > The Darkness and the Deep

The Darkness and the Deep

The wreck of the Knockhaven lifeboat with the loss of all three of its crew is a hard blow for the small Scottish town. But it’s harder still when DS Tam MacNee discovers that it isn’t simply a tragic accident. Was it just the act of vandals, bored in a fishing port stricken with unemployment? Could it be linked to the drugs trade which has taken root in the locality? Or is there someone who, in their determination to kill one person, is callous enough to take two innocent lives? And if so, who is the intended victim? As DI Marjory Fleming and her team investigate multiple murders, with a whole community hungry for justice, the pressure – professional and personal – is on.

Reviews of The Darkness and the Deep

Aline Templeton lives in Edinburgh with her husband and their Dalmatian dog, in a house with a balcony built by an astronomer to observe the stars over the beautiful city skyline. She has worked in education and broadcasting and has written numerous articles and stories for newspapers and magazines. Her books have been published in translation in several European countries as well as in the United States. COLD IN THE EARTH is her seventh novel, the first in a series featuring DI Marjory Fleming.