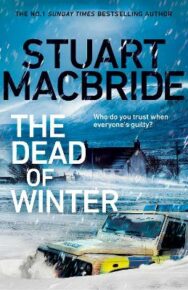 Home > Fiction from Scotland > The Dead of Winter

The Dead of Winter

THE UNPUTDOWNABLE, UNMISSABLE NEW THRILLER FROM THE NUMBER ONE BESTSELLING AUTHOR.It was supposed to be an easy job.All Detective Constable Edward Reekie had to do was pick up a dying prisoner from HMP Grampian and deliver him somewhere to live out his last few months in peace.From the outside, Glenfarach looks like a quaint, sleepy, snow-dusted village, nestled deep in the heart of Cairngorms National Park, but things aren’t what they seem. The place is thick with security cameras and there’s a strict nine o’clock curfew, because Glenfarach is the final sanctuary for people who’ve served their sentences but can’t be safely released into the general population.Edward’s new boss, DI Montgomery-Porter, insists they head back to Aberdeen before the approaching blizzards shut everything down, but when an ex-cop-turned-gangster is discovered tortured to death in his bungalow, someone needs to take charge.The weather’s closing in, tensions are mounting, and time’s running out – something nasty has come to Glenfarach, and Edward is standing right in its way…******Praise for Stuart MacBride:’A magnetic mix of creepy places, dark humour, horror and violence’ Sun’Dark and brilliantly written’ Linwood Barclay’MacBride is a damned fine writer’ Peter James’MacBride’s thrillers just keep getting better’ Express’Crime fiction of the highest order’ Mark Billingham***AVAILABLE TO PRE-ORDER NOW***

Stuart MacBride is the Sunday Times No.1 bestselling author of the Logan McRae and Ash Henderson novels. He’s also published standalones, novellas, and short stories, as well as a slightly twisted children’s picture book for slightly twisted children.Stuart lives in the northeast of Scotland with his wife Fiona, cats Gherkin, Onion and Beetroot, some hens, some horses, and an impressive collection of assorted weeds.For more information visit:StuartMacBride.comFacebook.com/stuartmacbridebooks@StuartMacBride