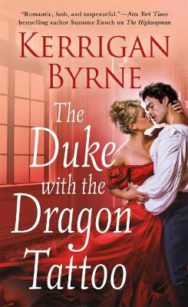 Home > Fiction from Scotland > The Duke With the Dragon Tattoo

The Duke With the Dragon Tattoo

He’s known only as The Rook. He remembers waking up in a mass grave with rage dissolving his soul. He has no memory of his past. His family. His sins. His name. And when his escape from the grave leaves him collapsed, he is rescued by the most beautiful young woman he’s ever laid eyes on. A woman who could maybe, just perhaps, heal the broken parts of him. If only he knew who he was.Lorelai Weatherstroke is comprised of three monumental days in her life. The day her cruel brother shattered her leg and left her crippled for life. The day she rescued the broken, dark angel beneath the Ash tree as at the age of sixteen. And the day he left her house, her care, and her heart, never to return again. But even twenty years later, she recognises Ash, The Rook, instantly, as he comes surging back into her life to avenge her tormentors. But he has more enemies than the Devil waiting to hunt him down. Ash has already claimed Lorelai in his heart, but can he win back her love as he keeps her safe?

Whether she’s writing about Celtic Druids, Victorian bad boys, or brash Irish FBI Agents, Kerrigan Byrne uses her borderline-obsessive passion for history, her extensive Celtic ancestry, and her love of Shakespeare in every book. She lives at the base of the Rocky Mountains with her handsome husband and three lovely teenage girls, but dreams of settling on the Pacific Coast. Her Victorian Rebels novels include The Highwayman and The Highlander.