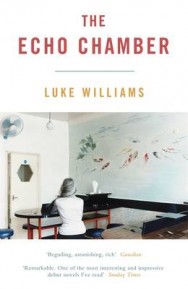 In coming into the world Evie Steppman pushed her mother out of it. Born two months late but with an extraordinary gift of hearing, Evie has an impression of the world vastly different to the experiences of other people. Taking us from Nigeria in the 1950s to 1970s America and finally on to Scotland in the early twenty-first century, she tells us the strange story of her origins and life through her unique sensory gifts. It is a story of colonialism and empire, of love and death, of hope and fear, of mystery and strangeness, and above all, of sound and an unwanted, but inevitable, silence.

Reviews of The Echo Chamber

Beguiling, astonishing, rich Guardian Rich and resonant … stuffed with stories, literary references and peculiar details, this beguiling novel is a work of astonishing synthesis Guardian Weaves a rich web of stories, while playfully questioning notions of truth, history, narrative, even the reliability of words Scotland on Sunday Read this novel aloud. Read it wearing earplugs. But read it, and notice its aural effect Sunday Times

Luke Williams was born in 1977. He grew up in Fife, Scotland, and now divides his time between Edinburgh and London. The Echo Chamber is his first novel.