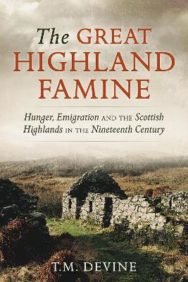 Home > Academic > Arts and Humanities > The Great Highland Famine: Hunger, Emigration and the Scottish Highlands in the Nineteenth Century

The Great Highland Famine: Hunger, Emigration and the Scottish Highlands in the Nineteenth Century

The Great Hunger in nineteenth-century Ireland was a major human tragedy of modern times. Almost a million perished and a further two million emigrated in the wake of potato blight and economic collapse. Acute famine also gripped the Scottish Highlands at the same time, causing misery, hardship and distress. The story of that lesser known human disaster is told in this prize-winning and internationally acclaimed book.The author describes the classic themes of highland and Scottish history, including the clearances, landlordism, crofting life, emigration and migration in a subtle and intricate reconstruction based on a wide range of sources. This book should appeal to all those with an interest in Scottish history, the emigration of Scottish people and the Highland Clearances.

Reviews of The Great Highland Famine: Hunger, Emigration and the Scottish Highlands in the Nineteenth Century

'This book is a major step forward in Highland historiography' * Northern Scotland * 'Devine's history is total, sensitive and scholarly with something to say to anthropologists, sociologists and humanists as well as historians' * Choice USA: A Current Review for College Libraries *

Sir Tom Devine is the Sir William Fraser Professor Emeritus of Scottish History and Palaeography at the University of Edinburgh. He is the author or editor of more that forty books on Scottish historical studies and related fields. The only historian to be knighted by HM The Queen ‘for services to the study of Scottish history’, he has been described by The Times newspaper ‘as close to a national bard as the nation has’.