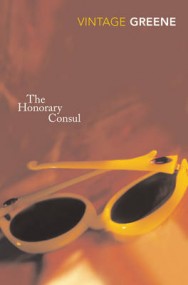 WITH AN INTRODUCTION BY NICHOLAS SHAKESPEARE Charley Fortnum is the ‘Honorary Consul’, a whisky-sodden figure of dubious authority taken by a group of rebels. As Eduardo Plarr, a local doctor, negotiates with revolutionaries and the authorities for Fortnum’s release, the corruption of both becomes evident. In this spare, tense novel, Graham Greene explores the morality of a political system that turns priests into killers.

Reviews of The Honorary Consul

"Perhaps the most enduring novel that even he has give us" Daily Mail "The tension never relaxes and one reads hungrily from page to page, dreading the moment it will end" — Auberon Waugh Evening Standard "Greene's work attempts to link the serious moral imagination with the spirit of adventure and romance and to extend the remapping of imaginative geography first undertaken by Conrad" Times Higher Education Supplement "A superb storyteller with a gift for provoking controversy" New York Times "Greene had the sharpest eyes for trouble, the finest nose for human weaknesses, and was pitilessly honest in his observations… For experience of a whole century he was the man within" — Norman Sherry Independent

Graham Greene was born in 1904. He worked as a journalist and critic, and in 1940 became literary editor of the Spectator. He was later employed by the Foreign Office. As well as his many novels, Graham Greene wrote several collections of short stories, four travel books, six plays, three books of autobiography, two of biography and four books for children. He also wrote hundreds of essays, and film and book reviews. Graham Greene was a member of the Order of Merit and a Companion of Honour. He died in April 1991.