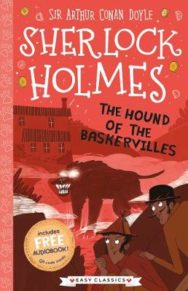 Home > Children's > Fiction > The Hound of the Baskervilles (Easy Classics)

The Hound of the Baskervilles (Easy Classics)

An illustrated adaptation of Sir Arthur Conan Doyle’s classic Sherlock Holmes mystery – at an easy-to-read level for readers of all ages! Also includes a QR code for the free audiobook!I shall now reveal the truth of the legend behind the hound of the Baskervilles … No Baskerville should ever cross the moor at night.With a deadly phantom hound on the loose and a mysterious man living on the moor, Devon is a dangerous place to be. But Holmes and Watson must put their fears aside. The country’s favourite crime-fighting duo need to unravel the strange case of Sir Charles Baskerville’s murder before his nephew meets the same fate.